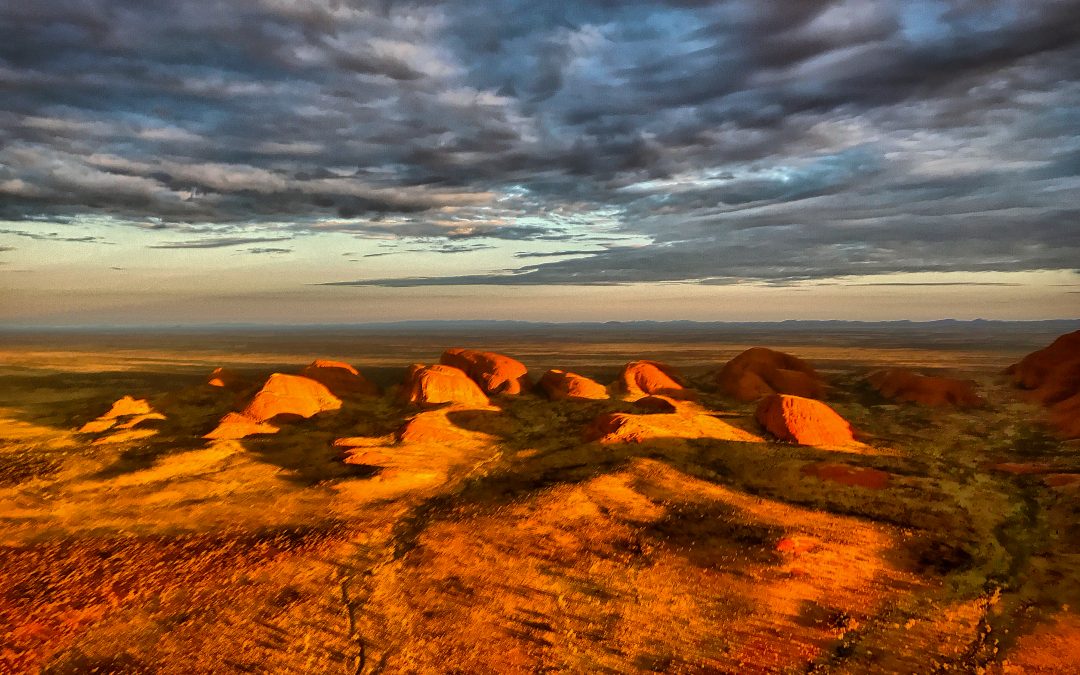 In 2017, right after my Easter trip to Israel, I started getting visions of Uluru, aka Ayers Rock, the large red rock in Central Australia. I had seen pictures of it before but I had never thought it would call out to me in the way it did. As I normally do before all major travels, I reached out to my friend, Alma, for an Akashic Records session. I had met Alma at an Akashic Records conference in Chicago, in 2015, and we had taken an instant liking to each other. It felt as if we were sisters from another time and place, so deep was our connection. Over the years, I have learned to trust the guidance I receive when we are working together in Akashic Records sessions. It is a ritual for me to work with her when I am preparing myself to travel to these amazing places.
Alma described the vision she saw.
“Australia, like all ancient lands, has many intense energies. Out of these energies, the Aboriginal energy is coming through the strongest. It is so intense that it feels as if the land is steeped in it. It didn’t matter how many foreigners have settled down or visited Australia over the centuries, it continues to vibrate with the energy of the Aboriginal people, such is their relationship with the land. I see them coming out of earth and forming a part of the landscape as rocks.
“There are areas in Australia that are recognized by the Aboriginal people as centers of specific vibrations. They treat these places as important. These are places where they do dreamwork. I can see the faces of several Aboriginal people lying outside at night. They are either awake, looking up at the sky and watching the stars go by, or they are dreaming and yet that is what they see. These people are together either in a wakeful state or in their dreams. Some are work on their own, while others work in groups.”
It was fascinating to hear her describe what she was seeing but I would have my own experience later in Australia.
“I see you sketching at a couple of places there, “ she carried on. “There is something about the way you are sketching that is bringing in some of that energy into whatever you are sketching. It is a way for you to connect with the energy there and to take some of it back with you. It literally gets encoded into whatever you are drawing. Ask for permission to take a little piece of that energy with you. Invite it to come with you, then you start sketching. It will be at the rock, the rock of fire. I see you approaching it with a sense of awareness of the energies of the guardians of the place, with respect and reverence. You can feel their energy from a mile away. By the time you get close to the rock, the energy can already feel your approach. You talk to them in a way you feel is right. They see you coming and start checking your energy out as you get closer. They pick up on your vibration, looking at different aspects of your energy. They will pick up Yeshua’s energies, which you carry, and all other energies. It is significant that you have the masculine-feminine balance that you are working with. That is something they will pick up on. Your way of approach and seeking permission will be noted. You will be allowed to come closer. Ask for a little bit of energy that you can take with you, for there will be a lot. I see you sitting down to draw. The energies are coming in around you and are looking at what you are doing. I see there are some Aboriginal shamanic energies that are there. I am seeing them in their bodies, their hair grey, some dark, some white. I am seeing one of them coming up to you and looking over you, to your right. The color of his skin is very dark. He has light coloured paint on him. His hair is frizzy. He is leaning in. He is one of many there. He has had a human life. There are other energies there that never had a human body. They are a mix of human and non-human energies. There is an interaction taking place there between you and them. You will be granted what you are asking for — that drawing, whatever you draw, will carry a part of that energy back with you. ”