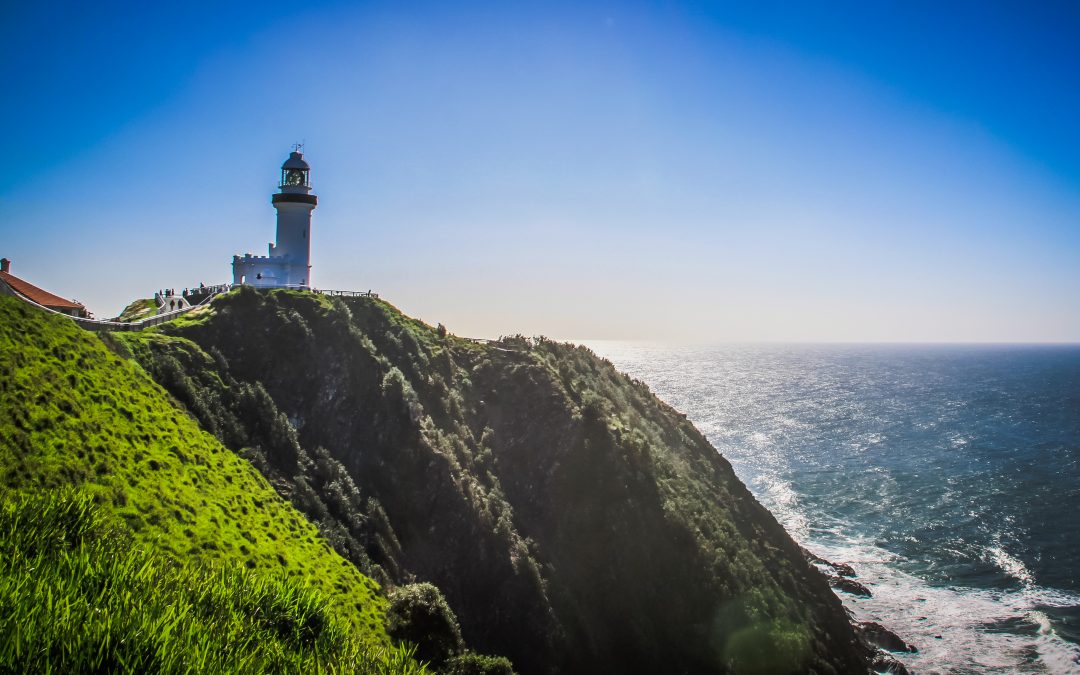 On 01 June 2017, I took a flight from Yulara to Brisbane, via Sydney, and arrived a few minutes before the last Byron Bay Easybus left the airport. After a three hour shuttle ride, I got off at the Airbnb place I had booked. It was closer to 11pm by then.
I woke up around 9am and had breakfast at the big table in the kitchen. Gary, my host, who had been kind enough to stay up for my late evening arrival, asked me what my plan was. I told him I was there for two things — go to the lighthouse, then meet a friend. I was flying back the the day after.

Gary offered to take me to the lighthouse, which was a few kilometres from Ruskin Street, where his place was. We drove to the starting point of Tallow Ridge Track and followed the uphill trail to emerge near Cape Byron Lookout Point, which offered a fantastic view of Tallow Beach. We spent some time chatting at the lighthouse then headed down the slope towards the tip of Cape Byron, the most easterly point of the Australian Mainland. After taking some touristy shots, we followed the Cape Byron Walking Track, past Wategos Beach, towards Byron Beach. I was excited when I spotted a few dolphins swimming close to the shore. Gary mentioned they had regular whale sightings in summer.

Byron Bay was a small town with a lively yet relaxed feel to it. Gary told me it was a destination for surfers and backpackers. It had a small population of about 5000 permanent residents but attracted tens of thousands of tourists every year to its numerous world class festivals and to the natural attractions in that area. It also has a number of artists and spiritual practitioners that come for inspiration and to do retreats. My original reason for visiting Byron Bay was to meet Qala Sri’ama Phoenix, the founder of the Sirius Library and the Divine University. I had immensely benefited from her teachings over the past year or so. How I came to know about her and the Sirius Library is a beautiful tale; I am going to save it for another time. Unfortunately, Qala was traveling during that period. However, she recommended I meet one of the Divine University mentors, Ra’shiym Yhabriel Christos. So, I was there to meet him, secretly hoping I would get to see the place where the group meditated. I always pictured it as a temple with a big verandah, not sure why.

Gary and I walked from the beach to Bayleaf Cafe on Marvell Street. Ra’shiym was waiting for me there. After saying hello to Ra’shiym, Gary went home. Ra’shiym and I sat down to have tea. I spent a whole minute looking into his grey eyes. It felt as if I knew him from another space and time. There was so much depth in his eyes, it was not easy to look away. He waited for me to finish, with a smile on his face. Such innocence and so much love, I noticed in his energies!

I told Ra’shiym how Qala had asked me to meet him. Now, when I look back, it wasn’t just a coincidence. He would later be assigned as my mumara or mentor when I would sign up for a year long course with the Divine University. Really, nothing is a coincidence.

As we sipped tea, I gave him a brief overview of my recent travels and spiritual experiences. Of the various stories I told Ra’shiym, the one that stood out was about the “faith rock” riddle Yeshua had given me to solve when I was meditating at the Garden of Gethsemane in Jerusalem, Israel. Although I won’t go into the details here, the high point of that trip was deciphering what Yeshua was trying to teach me when I bought a Tree of Life sculpture. Ra’shiym told me he was the Keeper of the Tree of Life on earth. I took that as a sign. Somehow, Qala had known we would connect at a different level.

The biggest takeaway from that conversation was not to look back at past lives. We are on a constant path of ascension. It is like climbing steps. Once you have climbed up to a step, you don’t need to look back at a step you have already crossed. It is nice to know and acknowledge the information that is brought forward, but we don’t need to live through those experiences again. We are learning new lessons and so we must keep climbing.

I told Ra’shiym I was going to Egypt in September and that I felt he could help me prepare for that trip. We both felt we needed to meditate on it, so he suggested we go to Yummy Studios, a teaching centre he had just finished building. We were crossing the street to get into the car, when I noticed he was walking barefoot. He told me he did that to stay grounded, connected to Gaia’s energies.

Yummy Studios had a hall that housed a massive crystal altar right in the middle. I had never seen such huge crystals before. In fact, I had never been drawn towards crystals, as far as I could remember. These were a few kilos each. It was the outer temple space. Ra’shiym then took me to a smaller temple space in the adjoining room. It had a huge crystal standing upright, well over ten kilograms in weight. I told him I wanted to meditate there. He then walked me through a meditation technique that would help me hold energies within my body and left me by myself for a few minutes. As I followed the steps, I began to feel energy filling up my body. It was so intense that my back was stretched straight. I could not move. I had never experienced such intense energy in my body before. Did it have something to do with the crystals?

Ra’shiym came back and showed me how to release the energy. Then we sat down to meditate. He started channelling a message for me from Sananda, Yeshua’s higher self. Given my work with Yeshua, it was no surprise Sananda came through to offer guidance. It was also an acknowledgement for the work I was doing, the path I was on. However, I forgot to record his message and I feel sad to this day. On top of that, neither of us remembered the details afterwards; that is a rare occurrence for me, at least. So much for being a good student.

We continued to meditate for some time. Then suddenly both of us opened our eyes and looked at each other. Both of us spoke at the same time. Ra’shiym said he would need to take me somewhere to get crystals; I said yes. It dawned on me a second ago that the rock Alma had mentioned before was a crystal. I was to take a crystal back with me, not a rock from Uluru. Ra’shiym said he needed to speak to a few custodians of that place before he could take me there. Since, it could not happen immediately, he suggested visiting the place on the following day. I told him I was okay as long as I could get back before noon to catch the shuttle back to Brisbane. But there was one more complication. We needed a car. The one Ra’shiym was driving had to be returned to its owner, a friend he had borrowed it from. We discussed and felt the best option was perhaps to ask Gary if he would like to drive us to that place, somewhere in Byron Bay Hinterlands.