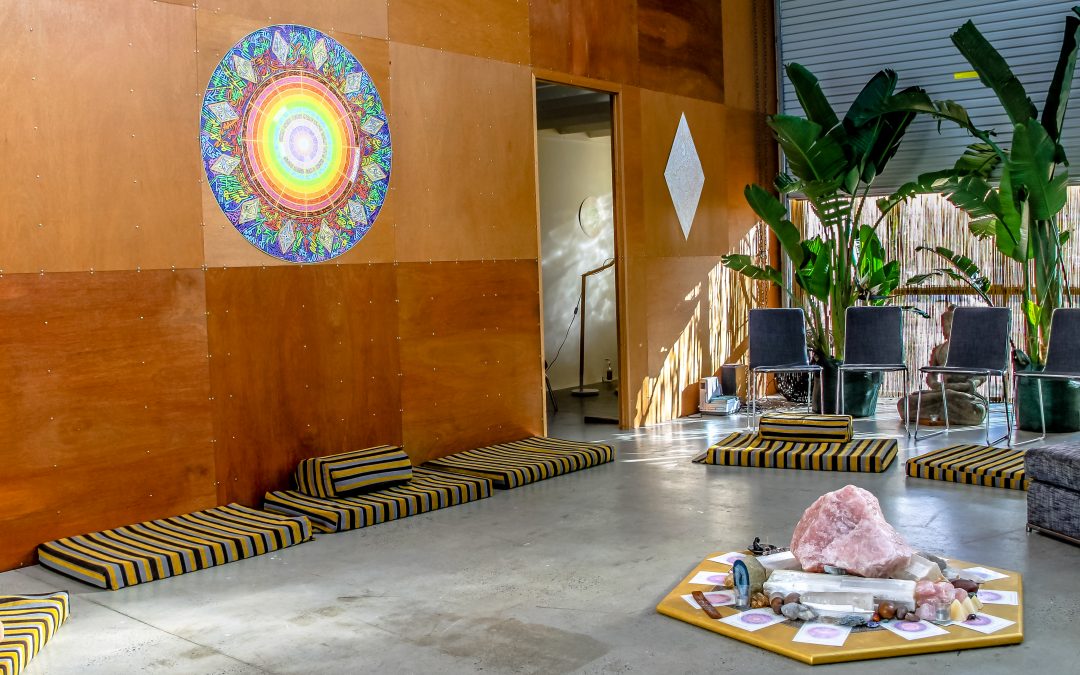 Back at the Airbnb, I convinced Gary to drive us to the secret place. I told him it wasn’t open to public for another ten years, which is what Ra’shiym had told me earlier in the day.

Gary and I picked up Ra’shiym around 8am and we drove through the beautiful hinterlands of Byron Bay towards that secret location. The energy of that place was so strong that I could sense it from 5km away. When we arrived, we left our phones and shoes in the car and walked through the entrance to the farm. Ra’shiym told us Qala had a lot of initiations and activations on that land, something I had read in her book Opening Our Spiritual Eyes: Karmic Clearing for Humanity and the Earth. We walked past a wooded area to emerge at a clearing. There was a huge circle of large crystal pillars sticking out of the ground. Ra’shiym told us we were at the Elohim Gateway and that those pillars ran 6 feet into the ground. I share a special resonance with the Elohim since the time they had showed me how I was created from what looked like liquid metallic light, in another space and time.

Ra’shiym led us to a building towards the other side of the clearing. It had a long hall with logs of white crystals on one side and rugs on the other. Towards the far end of the hall was a meditation room, which I felt had the same dimensions as the King’s Chamber inside the Great Pyramid of Egypt, although I hadn’t been there yet.

Ra’shiym then asked us to pick the crystals we wanted to take back with us. They were selenite logs shipped all the way from Morocco. He said the logs had been blessed and energized during their stay in that temple. As I walked around checking the logs, not knowing how to pick a crystal, I felt three of them calling out to me. Each log weighed at least 6 to 8 kilos. I could see myself placing them in a triangular altar back at home but would three be too many to carry back? Ra’shiym said I should take a fourth one, which would act as the master crystal, similar to the one I had seen standing in the middle of his altar at his studio. But, for some reason, I felt I had to take three. Gary and Ra’shiym picked one each. Following Ra’shiym’s guidance, we lay them in front of us and placed our hands on them as we closed our eyes and prayed. It was my first time working with crystals. As we sat there physically, I felt as if I had zoomed out of that room and was floating in space. What an awesome experience!

After we were done praying, we picked up the crystals and headed to the gateway. Ra’shiym led us through a ceremony and showed us how to walk inside the circle. It had 22 crystal pillars, each dedicated to a particular lesson the soul had to experience, from what I inferred. As we went from pillar to pillar, there were some where we paused to meditate or pray. There were pillars dedicated to Love, Divinity, Compassion, and Forgiveness — four out of my seven current life lessons; the rest being sorrow, anger, and, the big one, patience. So, I felt a deep connection to that place. After I completed my circles, I went back to three pillars, following my inner guidance. These were Innocence, Karma, and Creation.
At the pillar of Innocence, I saw a white dove through my inner eye. The image of Mother Mary came forward. She had started appearing during my meditations over the recent months and would help me cope with the loss of my best friend, my cat, Dino a couple of months later. I feel so much compassion and unconditional love when she is present. At the pillar of Karma, I was given specific energy movements to follow using my hands. These would help release karma. I shall share the movements on another day. At that pillar, I also saw the fleur-de-lis. The symbol had started showing up since my trip to Israel, when Yeshua asked me to keep my eyes open for the flower. I have used it several times for specific work related to cleansing of places, in terms of releasing stuck energies.
At the pillar of Creation, I was taught how to work with the infinity symbol for manifestation purposes. This teaching was specific to twin flame energies. I would later learn other purposes of the infinity symbol in Cambodia and Hong Kong, then link it back to what I had discovered in Israel. Since the topic is quite vast and touches upon learnings from various places, I shall address it separately on another day.

We reached Byron Bay by noon. I had enough time to repack my suitcase with the three Selenite logs I was now carrying with me. The shuttle arrived on time to take me to Brisbane from where I flew home to Hong Kong.