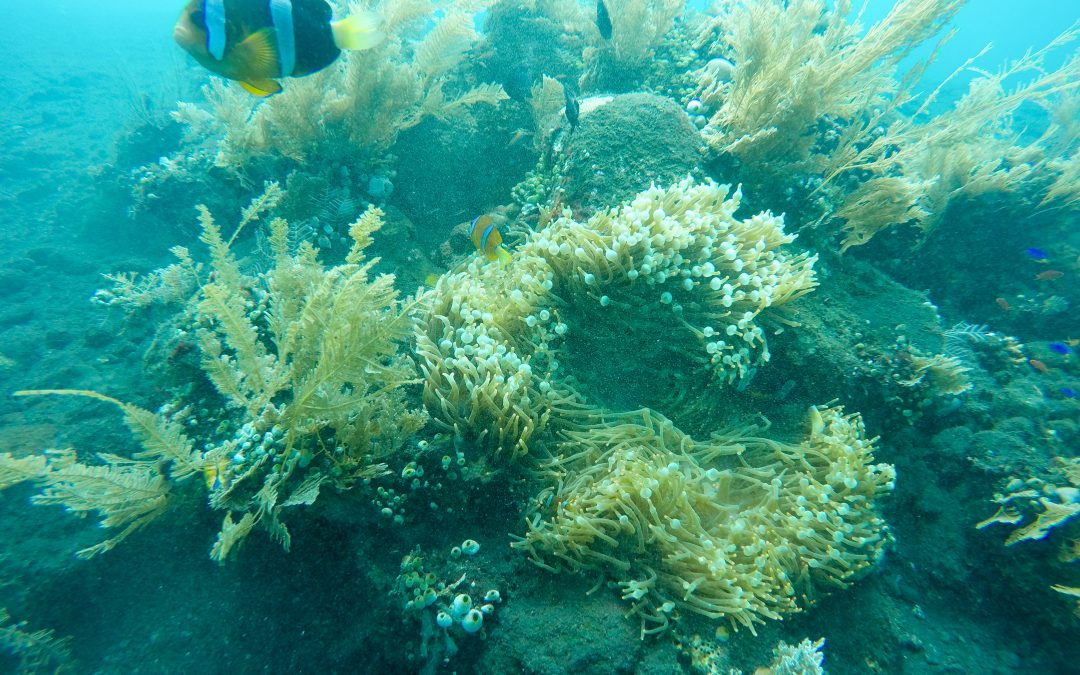 On 29 September 2015, a car picked me up around 6am to take me to Discover Scuba Diving Centre by Amed beach. After an hour long training session in their pool with my instructor Max, we headed to the dive point in Tulamben. The beaches in Amed and Tulamben were a sharp contrast to the soft sandy white popular beaches around the southern resorts in Bali. These ones had smooth black pebbles and volcanic rocks, and were quieter, deserted even.
At the dive point, we found a spot on the beach for us to get into our tight wetsuits. He repeated the instructions as he proceeded to help me put my lead belt and cylinder on. I am a terrible swimmer, more like a sinker, and this was my first dive. I joined him as we walked backwards off the rocky beach into the sea. Then we put on our flippers and sank ourselves to the ocean floor. The sky was cloudy on that day and the water very murky. It was difficult to see beyond a few metres. Max and I swam over the corals, that were a sharp contrast to what one sees in the movies. Everything looked brown and lifeless. I was disappointed. Moreover, I was afraid I would lose my bearings and crash into them. I started swimming faster so that the momentum would carry me forward and I would not end up regretting for the rest of my life. Meanwhile, Max was busy shooting with his GoPro as he hung on to me trying to slow me down. I was unaware of his actions but noticed that I was getting slower and slower. So, I put more force into pulling ahead. Max stopped me after some time to take a look at the dial on my oxygen tank. It was almost exhausted. He motioned it was time to get back. When we got to the beach and pulled out of the water, I realized how heavy our equipment was. After helping me take off the cylinder, Max explained I had to breathe slowly in order to extend the duration of our next dive.

We took a break before heading into the waters again. This time he wanted to show me a shipwreck. The USAT Liberty was in service as a US Army cargo ship in World War II, when it was torpedoed, 19 km to the southwest of Lombok Strait, by a Japanese submarine. Although an attempt was made to tow her to Singaraja, she took in too much water and had to be beached at Tulamben. That was in 1942. In 1963, Mount Agung erupted and the tremors pushed the Liberty off the beach. It now rests on a sandy slope between 7 to 30m underwater. We took pictures at the top edge of the wreck at a depth of around 10m. Max wanted to take me further but I had a problem. My mask was leaking. Although I tried to blow it out repeatedly, it was not long before my nostrils were submerged. I signaled Max that I need to go up because I could not breathe. He insisted I blow out one more time. This time, I blew so hard that the mouthpiece flew off my mouth. Max reacted in a split second and shoved the emergency one into my mouth but I had already taken in water. I could not breathe. I inflated my suit and floated up to the surface. I coughed quite a bit before I breathed in fresh air. Max floated up and explained to me how surfacing so quickly would lead to decompression sickness. When we breathe compressed air from the oxygen tank under water, at high pressure, nitrogen goes into the body’s tissues. If we surface too quickly, it forms bubbles in the body. This could lead to tissue and nerve damage, sometimes paralysis or death. Max asked me if I wished to continue the dive. I decided to abort it as I was wary of having an asthma attack. We went under again and made our way back to the beach. I swam the whole way with one hand on my mask, holding it in place.

Back on the beach, I was pissed at myself. We had so much air left in the tanks and a beautiful wreck awaited us but I had made a choice to abort. It was like I had thrown in the towel before the match was over. I was young then, full of competitive spirit. Max calmed me down by saying I was brave enough to go out into the sea even when I couldn’t swim. I thought he had a point and so I let it go. We headed back to Amed for lunch, passing by the magnificent Mt. Agung.

Sometimes life doesn’t go according to our plans. We must not be harsh on ourselves, especially when things are beyond our control.

Go to the next chapter Bali: Mr. Batur or go back to the main page