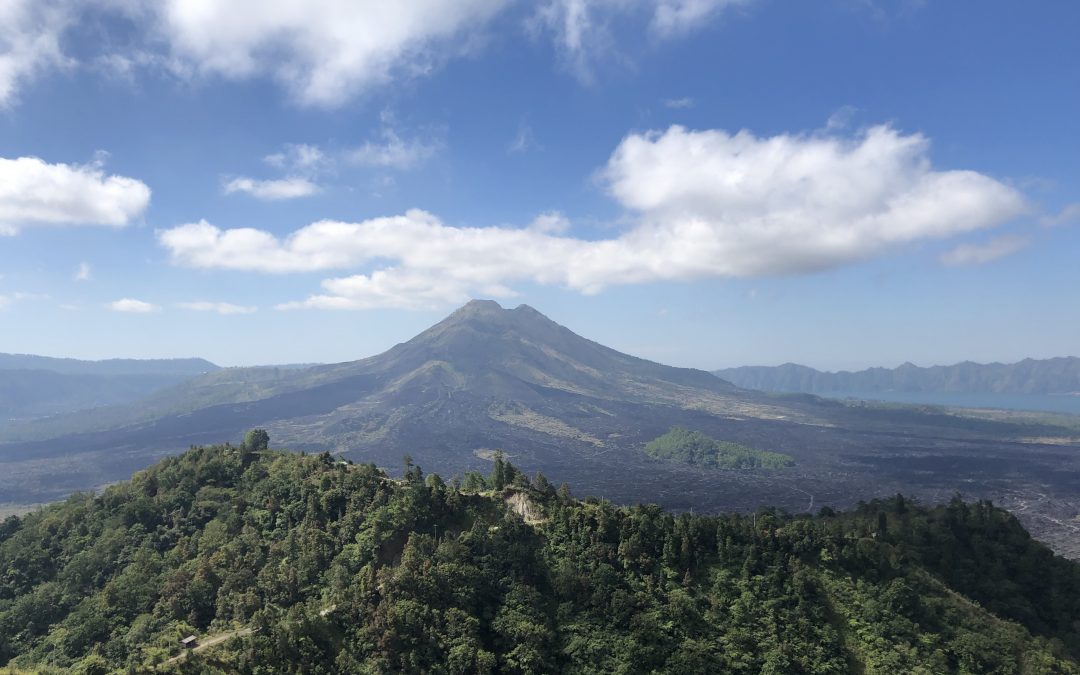 When I touched down in Bali in June 2019, my second time in four years, Mt. Agung was still off limits due to recent eruptions. I had passed by it during my previous trip but was oblivious to its sacredness. I didn’t know how to work with energies then, although that was my first sacred journey. Since I could not go to Mt. Agung this time too, I decided to go to Mt. Batur instead. Both the volcanos are active but Mt. Batur has not erupted in recent times. While Mt. Agung is the highest point on the island and manages to influence rainfall patterns, Mt. Batur is known for its beauty. It is at the center of two large concentric calderas, the larger of which houses a lake. Hundreds of tourists flock there every day. While some come to enjoy the view from Kintamani, a town along its southwest ridge, others do a sunrise or a sunset trek to the summit of the central crater.

The Balinese work directly or indirectly with the tourism industry, which brings in good money due to the popularity of the island as a spiritual destination. Adventure-lovers come here for diving and other water sports. Its nearness to Australia makes it a favorite beach destination during the winter months in the southern hemisphere. The culture is a mixture of Hinduism, Buddhism, and what existed before Indian population came to the island centuries ago.

Not only did the ubiquitous Balinese temples reminded me of the temples in Odisha (formerly known as Orissa or Kalinga), my home state on the east coast of India, the vegetation looked similar. And that is just the beginning. One can find silver filigree (tarakasi) works in the shops here. Filigree comes from my hometown, Katak (formerly known as Cuttack). Katak city is over a thousand years old (built in 989 CE) but the connection between Odisha and Bali exists from a thousand years prior to Katak’s foundation. The story gets more interesting. On the full moon day in the auspicious month of Kartika (the 7th month of the Hindu calendar), otherwise known as Kartika Purnima, there is a festival in Odisha to commemorate the ancient mariners who used to sail from coastal Kalinga to the island kingdoms of Sri Lanka, Sumatra, Java, and Bali. The prevailing monsoon winds helped these traders bring muslin, rugs, gold and silver ornaments to these islands. From Bali, they would carry back pearls, beeswax, sandalwood, spices, silk, and camphor. Every year, before they set sail, their wives would gather by the boats and pray for their safe return. Even to this day, on Kartika Purnima, traditional Odia people wake up early and head to the nearest water bodies. They perform specific rituals and prayers before floating small boats made from paper and cork in the water. Flowers, a small lamp or an incense stick, and betel nuts are placed in these boats. How amazing is this! But it doesn’t stop there. There is an annual fair called Bali Yatra (Voyage to Bali) that runs along the banks of Mahanadi River in Katak. I have great memories from my childhood days when a bunch of us would head to the fair and spend hours playing games, shopping, and eating local delicacies. The last time I visited the fair was three decades ago; I hear it is still going strong. One can also find tie-dyed or batik clothes in Odisha and other parts of India. This style of dyeing clothes probably came from Java and is a local favorite to this day.

As we rolled into Kintamani, I noticed a dragon-shaped cloud floating above Mt. Batur. That was the sign I wanted as a confirmation that it was indeed at Mt. Batur where I needed to meditate and that I would not miss out on anything due to the inaccessibility of Mt. Agung. However, the plan for us, I was travelling with my members of my extended family, was to stop at one of the restaurants for lunch and viewing. The guide told me we were not going to enter the green parts of the outer caldera, contrary to my wishes. I picked a table that offered me a direct view of the volcano. As I started eating, I felt Mt. Batur was calling out to me. I was physically present at the restaurant but energetically I was already climbing the slope to the summit. I gulped down the food and ran to an incomplete floor two levels below the restaurant, where I found open space to meditate. I took out my Lemuria crystal and faced Mt. Batur. An earth dragon made its presence felt, its magnificent body forming the shape of the mount. Then it was the turn for the fire dragon, which came out from the central crater. A water dragon came in from the lake in the outer caldera. An air dragon flew in through the clouds. I held out my crystal and meditated, swaying with the energy movements they showed me. Then Guan Yin rose from the mount standing high above everything. It reminded me of the experience I had at the incomplete Big Buddha in Phuket earlier in the year, but that is a story for another day. Guan Yin gave me a sacred geometry symbol. It was the same symbol I had been given in the Garden of Gethsemane (Israel, in April 2017), at the Elohim Gateway (near Byron Bay, Australia, in June 2017). It had showed up at Bakong Temple (Cambodia, in June 2019) as well, but in a slightly different form. I understood the use of the symbol after two weeks while doing a sound activation in Hong Kong. The symbol contains energy movements that are required to activate the solar and lunar chakras of the human body. The primary purpose in this form is to balance one’s masculine and feminine energies.
The air dragon showed me how they were going to reshape the dragon-shaped cloud into lenticular clouds, perhaps as a confirmation of what I was seeing because I had doubted the sacredness of Mt. Batur. Also a reminder that my trip to Mt. Shasta was long overdue. And, at the same time, as they say — everything happens in divine time.

Like the indigenous people from other parts of the world, the first people of Bali worship the natural world. According to the locals, Batur caldera has four main components of earth – land, water, fire, and air. That would explain why I saw the different types of dragons there.

The Tirta Empul Temple in Bali is known for its holy water spring. It is a place where hundreds of people queue up to go through a purification bathing ritual. Although we made a brief stop there, I did not feel any resonance with it at all. I guess I am wired differently inside.

After my meditation was over, we headed to the rice terraces of Tegalalang.