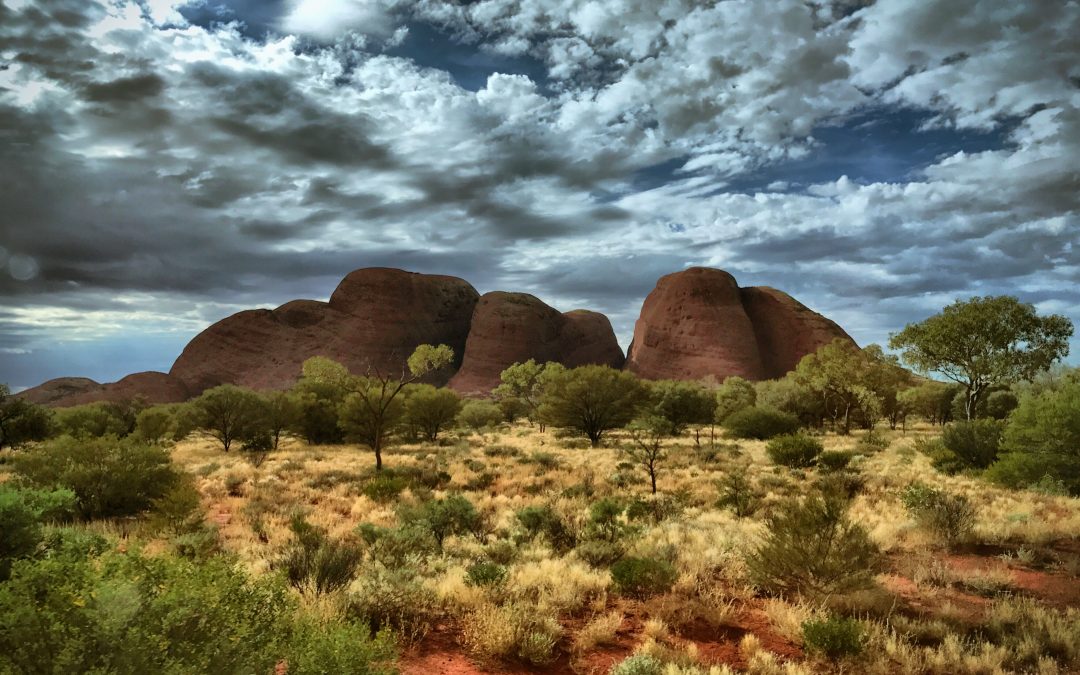 On 29 May 2017, after spending a couple of days catching up with friends in Sydney, I flew to Ayers Rock. The color of the landscape changed from green to scorched red desert by the time we arrived at the Red Centre, the home to Uluru and Kata Tjuta, and the heart of the Australian outback. I fell in love with Uluru the moment I saw it from the air!

A short bus ride later, we arrived at the Sails in the Desert, at the Voyagers Ayers Rock Resort. The resort had 3 other hotels and an open camping ground. In the 1970s, all tourist accommodation facilities were moved from the base of Uluru to outside the national park to reverse the environmental impact the fragile eco system had suffered for twenty years. The new township of Yulara was established to cater to tourists. The resort provides training and employment to the Aboriginal people, the Anangu, who are the traditional owners of the Uluru-Kata Tjuta lands and have been living in the region for thousands of years. The resort is in the middle of the desert. While it has the capacity to generate solar-powered electricity and source water locally, everything else is transported here by trains and trucks over hundreds of kilometres from Adelaide and Alice Springs.

While checking in, I made a last minute decision to go on a late afternoon helicopter tour of the area. I was in two minds about spending so much at first, but I took it as a sign when one spot was still available. These tours are usually booked out weeks in advance. This flight was sort of an aerial recon before my real work began on the following day. It was definitely worth it. The spectacular views from above Kata Tjuta and Uluru were priceless! As the sun dipped towards the horizon, the colors of the landscape changed from yellow to orange to red. It was an amazing experience. Unfortunately, my old camera and iPhone were no match for the vibrations of the helicopter. A GoPro would have done a better job at capturing stabilized video.

Later that evening, I joined the astro tour program at the resort. I was not going to miss the chance to view thousands of stars on a clear night, from a place where there was low humidity and zero pollution, especially when the tour provided access to telescopes. I had a Celestron telescope at home in Hong Kong, but clear, unpolluted nights were extremely rare. Sirius called out to me as soon as I sat down, making me smile. It was Sirius that had provided a much-needed turbo boost to my spiritual growth as an energy worker in 2015. I would love to tell you that story now, but let’s keep it for another time. My main takeaway from that evening was the Southern Cross. Although I may have seen it before on a previous trip to Australia when I had visited the observatory in Sydney, I had no clear recollection of it.

After dinner, I meditated and took permission from the guardians spirits of the land to do my work at Uluru and Kata Tjuta over the next two days.

On the following day, I was on the Uluru Sunrise & Kata Tjuta tour. We arrived at Talinguru Nyakunytjaku, a popular area for catching sunrise views of Uluru. As the sun rose over the horizon, and the sky got brighter, the color of Uluru changed from dark brown to a lighter shade. I could sense the guardian spirits watching me but it wasn’t time for me to visit the fire rock yet. We got back into the tour bus and headed out to Kata Tjuta.

Like Uluru, Kata Tjuta is visible from afar. The history of formation of these beautiful rocks goes back 550 million years when rainwater eroded the nearby Petermann Ranges and carried sand and rocks into the plains and deposited in fan shapes. One fan was mostly sand and the other mostly rock. A few million years after that, the area was covered in sea. The weight of the water and the seabed turned the sand fan into sandstone Uluru. The other one became Kata Tjuta. The sea disappeared 400 million years ago, the earth’s tectonic plates shifted and tilted both the formations. Uluru was tilted by ninety degrees! Since then, the softer rocks have eroded away leaving behind these magnificent natural structures. But what is visible above the surface of the land goes a few kilometers deep into the ground! Basically, these can be likened to rocky icebergs. While Kata Tjuta is mainly granite and basalt, Uluru is not. It is a made of a grey rock called arkose. Arkose contains iron and the rust gives Uluru its red shade. That and the red sand in this desert area gives it the name Red Centre.

Although the Valley of the Winds walk is more popular, our tour bus stopped at the entrance to Walpa Gorge. The sky had suddenly filled up with dark clouds making it look like it would rain any moment. Feeling slightly worried, I walked up the easy slope. Would I have enough time to meditate there? I knew I had to bring Christ and Magdalene energies to that place. Although I had taken permission from the guardian spirits of the land to bring the energies with me, I had not the faintest idea how I was supposed to do it. I requested guidance from Yeshua, whose presence I felt with me then.
“Keep walking.”
As I entered the gorge, I felt Yeshua and Mary Magdalene walking a few steps behind me. They were walking with me — both Christ and Magdalene! I was not merely bringing their energy, they were present with me! While my heart leapt with joy, my mind wondered why did they even need me to walk through the valley when they could just do it themselves. Were they teaching me a new method to work / walk with energies? I took a deep breath and let it go. My heart took over and the chatter in my head disappeared. As I walked, I could feel the eyes of the guardians spirits of the this sacred place look down from the top of the tall domes on either side. They watched me as I crossed the creek, passing rare plants along the way, and arrived at a viewing platform towards the end of the gorge. I sat down on a bench, facing the spear wood trees in front of me, with the wind whistling lightly into my ears. I closed my eyes and began the meditation. All I saw through my inner vision was bright light. After about eight minutes, Yeshua told me my job was done. I closed my meditation saying thanks to the ancestral energies of the place. Perhaps, it was important for the ancient energies to see the balance of masculine and feminine within me, as in within the one person. Perhaps it was something else, beyond the understanding I had then.
As I walked back towards the bus feeling satisfied, raindrops kissed the earth. The desert seemed to come alive with smell of moist earth. It was also a sign from above, an acknowledgement that my work at that sacred place was done. I would see this sign many times at different places around the world. I feel grateful as I share this with you.

We headed towards Uluru.

Go to the next chapter Uluru : The 3 Qs or go back to the main page